This week I came across #FolkloreThursday and the theme was Trees, I love trees with a passion almost as much as I love roses. So it gave me an opportunity to get out my research books and check out a few things. My favourite findings are more concerned with Greek Myths than folklore but I want to share anyway.

The Metamorphoses of Ovid (Translation by Allen Mandelbaum) is one of my all time favourite research books. As the cover of the book states, it is a ‘treasury of classical myths’. Written by the Roman Poet Ovid (43 B.C. – A.D.17) there are many different translations and even free versions online if you care to browse but Mandelbaum is my favourite.

The story I want to share is that of Apollo and Daphne and as you can see from the top image artists have recreated this story in so many wonderful ways. These are my favourites. The section of the poem I am sharing is the pursuit of the beautiful  Daphne, (daughter of the River God Peneus) by Apollo. He had previously mocked Cupid who shot him with a golden arrow which made him desire Daphne. She in turn was shot with an arrow of lead and thus filling her with hatred for Apollo. 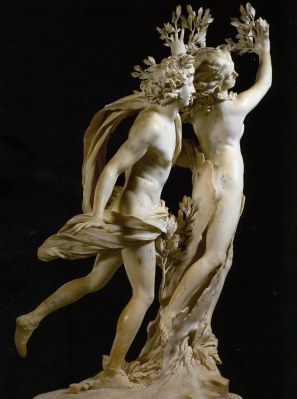 …love has given wings to the pursuer;
He’s faster – and his pace will not relent.
He’s at her shoulders now; she feels his breath
Upon the hair that streams down to her neck.
Exhausted, wayworn, pale, and terrified,
She sees Peneus’ stream nearby; she cries:
“Help me, dear father; if the river-gods
have any power, then transform, dissolve
my gracious shape, the form that pleased too well!”
As soon as she is finished with her prayer,
a heavy numbness grips her limbs; thin bark
begins to gird her tender frame, her hair
is changed to leaves, her arms to boughs; her feet-
so keen to race before – are now held fast
by sluggish roots; the girl’s head vanishes,
becoming a treetop. All that is left
of Daphne is her radiance.

And yet
Apollo loves her still; he leans against
the trunk; he feels the heart that beats beneath
the new-made bark; within his arms he clasps
the branches as if they were human limbs;
and his lips kiss the wood, but still it shrinks
from his embrace, at which he cries: “But since
you cannot be my wife, you’ll be my tree.
O laurel, I shall always wear your leaves
to wreathe my hair, my lyre, and my quiver. 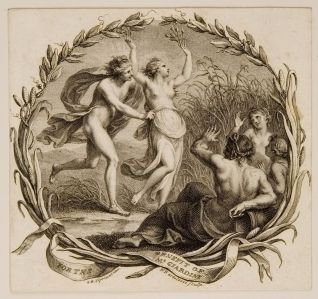 In my eyes I think the painting below APOLLO PURSUING DAPHNE by John William Waterhouse 1908 has got to be one of the prettiest, after the sculpture of course. 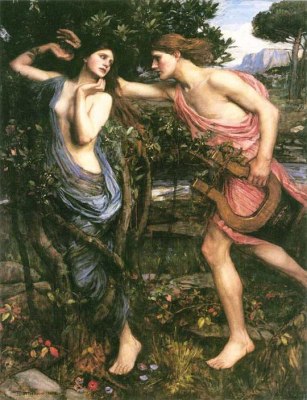 I hope you enjoyed this little insight into Greek Mythology?  I would love to know your thoughts, do you prefer the sculpture or the painting?